When you book with an account, you will be able to track your payment status, track the confirmation and you can also rate the tour after you finished the tour.
Sign Up
296
REQUEST AVAILABILITY BIKE RENTAL CUSTOM / PRIVATE NEWSLETTER TRIP ADVISOR INSTAGRAM

Cycling from Alghero to Oristano along coastal roads and Watchtowers.

A special short break cycling holiday in Italy. A Superior Self Guided Bike Holiday in a cyclist’s paradise rich in visible history, contrasting through the islands vibrant, colorful nature.

This West Sardinia Cycle Tour is also recommended for Families, couples and groups of friends.

The west coast of Sardinia has always been a hot spot for trade, power and control over the entire Mediterranean region. One of the most remnant notable influences in Sardinian culture is that of Spanish Imperialism.

Since then, it has become a mecca for sunbathers and outdoor tourism as Sardinia’s untamed locations are becoming rediscovered.

One of the best ways to rediscover Sardinia is through cycling along its endless undulating costal roads lined with Spanish fortified watch towers.

Meet and Greet, with Bike Tour Sardinia representative who will fit your bikes and introduce you to each days ride. Alghero is a lively, Catalan style city where they still speak Catalan since its Spanish domination. Its city center is still surrounded by Spanish fortified walls called the Mura Catalane (Catalan walls) on the seaward side. The walls also have watchtowers and an cannons seemingly still protecting the medieval city where it will be pleasant for you to walk along and have a drink at sunset before a seafood dinner!
lodging at Villa Mosca Hotel.
Meals included: Welcome aperitif

Head out of Alghero biking up and down the beautiful undulating roads, which skirts along the Coral Coast and is jam-packed with unforgettable landscapes. Once in Bosa you can also admire the massive castello Malaspina dominating the town, the Spanish towers and arched stone bridge in the bay. Enjoy the locally produced Malvasia wine while you soak up the evening sun or relish it with your dinner.
Lodging at Villa Asfodeli in Tresnuraghes
Meals included: Breakfast

Leaving Tresnuraghes, the rolling hills will guide you through cork forests and pass through characteristic little villages such as Sennariolo and Cuglieri, where you will see its prevailing domed Cathedral and Montiferru castle. Tackle the hills of the inactive volcanic mountain called Montiferru (iron mountain) before rolling down its forested slopes. Your destination will be the Medieval town of Oristano, famous as the last Sardinian stronghold against the Spanish dominance, and for Queen Arborea’s democratic governing. There is a statue in the governing queens honor right in the square of your hotel.
Lodging: Regina d’Arborea Hotel
Meals included: Breakfast

Departure for the peninsula of “Sinis,” where there are plenty of lagoons, wetlands and where you may also be able to see pink flamingos. The Sinis peninsula, know for the stone Giants of Prama is also a Natural Marine Reserve Area. Admire the ruins of the Punic-Roman port city “Tharros” with breathtaking views of the gulf. Visit the amazingly popular beach of Is Arutas with its white, quartz pebbled beaches. You’ll cross Cabras, famous for its “Bottarga”, dried fish eggs or Sardinian caviar and of course you can’t miss all the dominating Spanish Towers lined along the coast.
Meals included: Breakfast

Day 5Arrivederci! or loop bike ride on the area.

Choice of a short loop bike ride of the Oristano region in direction of Fordongianus, known for its Roman ruins of still active, thermal baths, or arrivederci via train to Cagliari or other destinations on the island.
Meals included: Breakfast 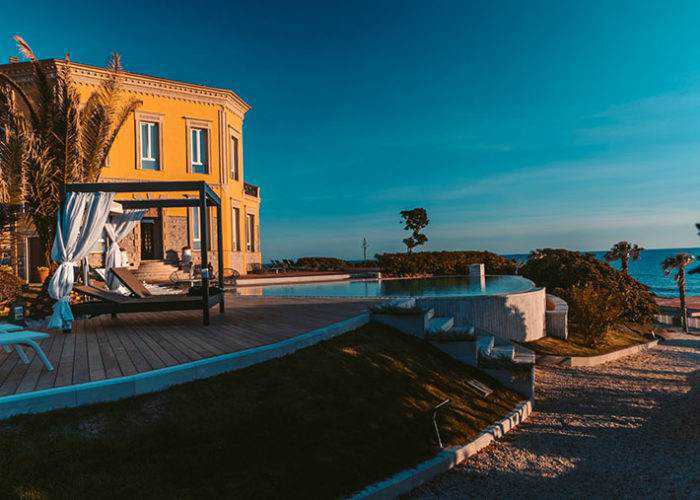 Enjoy a superior experience at Villa Mosca. It is a prestigious art nouveau residence. Located on the Lungomare Dante, right on the beachfront, surrounded by lush grounds and overlooking the sea, it towers above the gulf of Alghero. 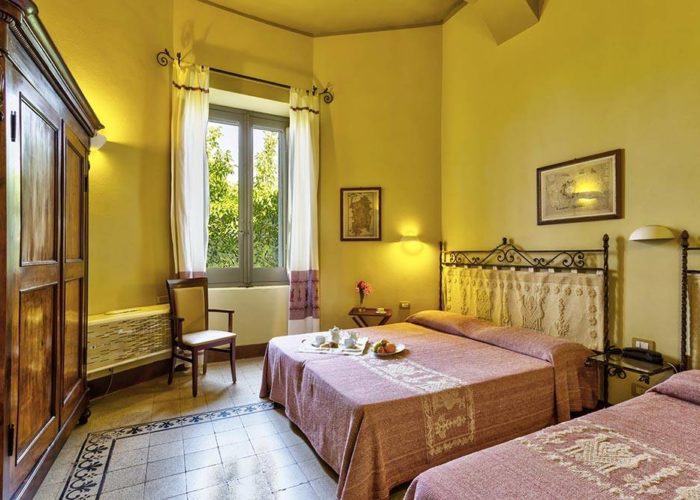 A synthesis of ancient architectural techniques and forms a fine restoration, which saved floors, windows and stucco originating. Remains intact the atmosphere of this place, now with the most modern comforts and a swimming pool for an unforgettable stay during your holiday in Sardinia. 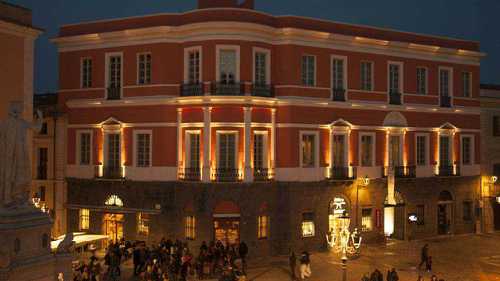 Located in a nineteenth-century building in the centre of the town, on the west coast of Sardinia, Hotel Regina D’Arborea is located in the historic center of Oristano, and offers air-conditioned accommodation and a continental breakfast with local and organic products.

Great Trip with a Great Company
Bike Tour Sardinia provided all the ingredients for an excellent vacation. To be honest, I was joining friends on this trip and really did not know much about Sardinia, or Mauro, But, after my second day, I realized I was going to have a lot of fun.
Sardinia has great bike riding. There is variation in the geography and scenery, so each day was a little different. Our ride started along the coast, then went inland, then back to the coast. I don’t know if all of Sardinia has good roads, but most of the routes Mauro put us on were smooth and clean. i could look around instead of looking down on the road.
The self guided part was easier than I thought it would be. The route directions were understandable. And, there aren’t that many opportunities to get lost.
There was some climbing, but the bike was comfortable and had a carbon fibre frame with good components. A heavier bike would have definitely changed my experience. I noticed some bike envy from people touring with other companies.
I traveled the end of June, and Sardinia was not too crowded. Dinner is almost as important as bike riding. Mauro provided some restaurant recommendations, which were helpful in the few cities we visited, and in the smaller towns. Almost every dinner was on the scale from very good to excellent. Finding lunch on route was sometimes a challenge but never impossible.
We stayed in some incredible small hotels. Mauro must have made an effort to find unusual places to stay, but at the same time, they were clean and convenient to the town and along the route.