When you book with an account, you will be able to track your payment status, track the confirmation and you can also rate the tour after you finished the tour.
Sign Up
198
REQUEST AVAILABILITY TOUR CALENDAR BIKE RENTAL CUSTOM / PRIVATE NEWSLETTER TRIPADVISOR INSTAGRAM

The Bicycle Holiday on the land of the great Wines! This is a total Bike & Wine immersion!

Cycling from alpine splendor to undiscovered villages and fortified castles, this Luxury Piedmont Cycling Tour combines the best of Italian and French cuisine and wine with scenic pedaling through rolling hills dotted with vineyards and castles.

Enjoy robust wines and sophisticated delicacies, including white and black truffles, fragrant cheeses, exquisite pastries and fine chocolates. Join us for heart-pumping rides through river valleys and up vineyard-draped hills.

You will stay in Luxury hotels, and eat the kind of luxuriously rustic food that has earned this region more Michelin stars than any other in the country.

In spite of the renown of its Barolo and Barbaresco wines, Piemonte is relatively undiscovered; you will experience the spectacular beauty of the Langhe and Roero hills.

Welcome to Piedmont. After our rendez vous in Torino Train Station transfer to Saluzzo where you we’ll toast your arrival with a traditional Asti Spumante during your bike fitting, safety talk, and map review. Then you’re free to explore town, once a flourishing medieval center and now a well-preserved gem known for its red-brick old town, churches and hilltop castle or to take a warm-up ride. This evening, we’ll celebrate with a traditional Piedmontese welcome dinner at our favourite restaurant Taverna dei Porti scur.
Lodging: Antico Podere Propano in Saluzzo
Meals included: Welcome aperitif, Dinner

Monviso mountain rises above the Po River on the border between France and Italy.
Our route takes us to the base of the mountain today; those who want can climb it to Crissolo or as high up as the Po River spring, Pian del Re, 6,000 foot climb into the Alps! Coming back we can stop at Staffarda Abbey, built by Cistercian monks in the 12th century. You’ll be back in Saluzzo late afternoon for a stroll through town. Gourmet dinner at La gallina Bianca.
Lodging: Antico Podere Propano in Saluzzo
Meals included: Breakfast, Dinner

Today we leave Saluzzo with a short transfer towards Racconigi, where the Savoy royal family had their summer home and castle. The castle, now owned by the state, is beautifully reserved and dates to the 17th Century.
After a few km riding on flat area we will cycle across the famous Roero hills, lands of excellent wines and valuable truffles. Follow corkscrew roads into the hills of the rural Roero, a gourmet’s paradise known for its pungent white truffles, soft fresh cheeses and hazelnuts. Monticello d’alba, Monteu Roero, Montà, Canale, Castellinando and last little village is Cinzano, the famous producer of sparkling wines, vermouths and aperitifs. on the scheduled departures (on Monday) we are able to visit the local market of Montà.
Lodging Albergo dell’Agenzia in Pollenzo.
Meals included: Breakfast, Picnic Lunch, Dinner

today we will introduce into the area of the Barolo production. we will pass Alba, famous for the production of the Nutella, and the complementary harvest of the hazelnuts, in Italy called “Nocciole”. this area is also renowed for the “With Truffle” founding , made with half-breed dogs. You will get to know the gracious medieval towns before reaching Canelli, where you will visit the unique underground cellars – the “cathedrals” – where the wine rests and ages in order to grant that special quality, which is appreciated worldwide. You will visit cellar: liberty style rooms decorated with frescoes lead down into bowels of hill through Sempione gallery. Back to the hotel with van transfer.
Dinner on your own in Pollenzo.
Lodging: Albergo dell’Agenzia in Pollenzo.
Meals included: Breakfast, Lunch

Today takes us through the vineyards of Le Langhe and the famous hills of the Nebbiolo grape. Along our route you’ll pass through the stunning landscape, as well as vineyards around Diano, Novello, Monforte d’Alba, Grinzane cavour, famous for its castle – one of the most ancient and important of the Langhe – where the annual white truffle world auction is held. We will have private wine tasting in La Morra, premiere Barolo-producing town and you will learn all about passion, as they explains region, viticoltori friends, the grapes and own terrific wines, which are some of the greatest Barolo, Barbera and Nebbiolo you will ever sample. Stay and explore Monforte d’Alba 1,000-year-old village.
Lodging: Hotel Villa Beccaris in Monforte d’Alba.
Meals included: Breakfast, Dinner

Another great loop in the Langhe: we’ll pass through the village of Barolo itself and some of the area’s most prestigious cru vineyards. Explore the delightful town of Barolo and enjoy an insightful talk about the region’s past and present along with a comparative tasting from legendary vintners. Enjoy splendid vistas of the Langhe landscape, a recently recognized World Heritage site. Weave your way up and down through sloping vineyards of Dolcetto grapes, which thrive in this area’s clay and limestone soil. For five centuries, grape growers of the Langa Doglianese region have continued to select and cultivate their vines with pride. The resulting Dolcetto di Dogliani wine is famous for its full flavor and remarkable versatility of pairing with food. Wind your way back through the vines and ready for a farewell dinner at restaurant in Monforte
Lodging Hotel Villa Beccaris in Monforte d’Alba.
Meals included: Breakfast, Dinner

Enjoy a farewell breakfast in the peaceful hills, then arrivederci in Torino.
Meals included: Breakfast 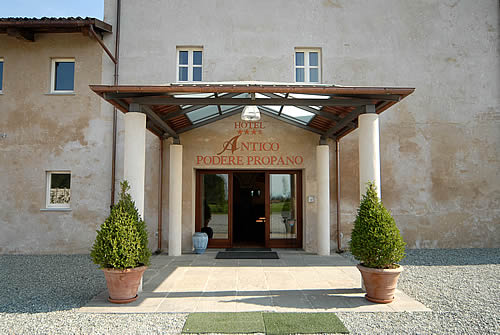 The farm Propano, that was owned by the Marquis of Saluzzo, has been transformed into a country hotel called “Antico Podere Propano”.  It is a charming hotel situated on the edge of Saluzzo surrounded by meadows, the mountain chain of Monviso and the fertile Po plain. 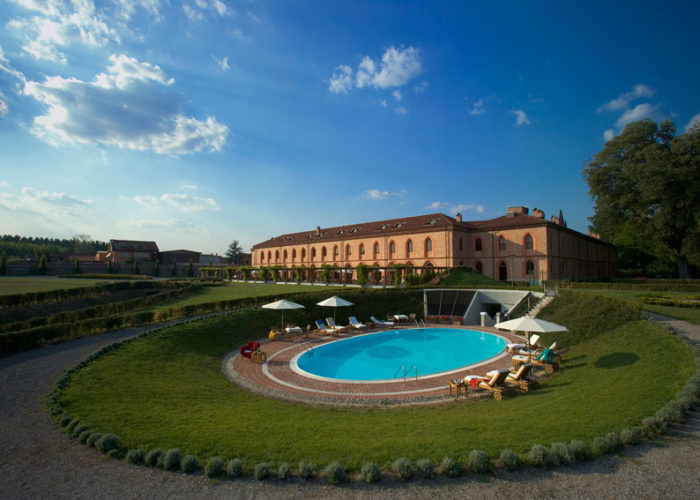 The 4-star Albergo dell’Agenzia hotel is situated in the beautiful restructured neo-Gothic country estate of King Carlo Alberto of Savoy. The site also comprises the University of Gastronomic Sciences and the Wine Bank. The hotel itself welcomes guests to Pollenzo in an atmosphere that is once warm, friendly and why not smart.

Villa Beccaris is located in an extraordinary position near to the town of Alba and it is the ideal place, rich in history, culture and beauty, where to spend unforgettable relaxing moments. This stunning XVIIIth century Villa offers to its guests breathtaking views on the Langhe vineyards and on the picturesque Monforte village

Great Trip with a Great Company
Bike Tour Sardinia provided all the ingredients for an excellent vacation. To be honest, I was joining friends on this trip and really did not know much about Sardinia, or Mauro, But, after my second day, I realized I was going to have a lot of fun.
Sardinia has great bike riding. There is variation in the geography and scenery, so each day was a little different. Our ride started along the coast, then went inland, then back to the coast. I don’t know if all of Sardinia has good roads, but most of the routes Mauro put us on were smooth and clean. i could look around instead of looking down on the road.
The self guided part was easier than I thought it would be. The route directions were understandable. And, there aren’t that many opportunities to get lost.
There was some climbing, but the bike was comfortable and had a carbon fibre frame with good components. A heavier bike would have definitely changed my experience. I noticed some bike envy from people touring with other companies.
I traveled the end of June, and Sardinia was not too crowded. Dinner is almost as important as bike riding. Mauro provided some restaurant recommendations, which were helpful in the few cities we visited, and in the smaller towns. Almost every dinner was on the scale from very good to excellent. Finding lunch on route was sometimes a challenge but never impossible.
We stayed in some incredible small hotels. Mauro must have made an effort to find unusual places to stay, but at the same time, they were clean and convenient to the town and along the route.