When you book with an account, you will be able to track your payment status, track the confirmation and you can also rate the tour after you finished the tour.
Sign Up
211
REQUEST AVAILABILITY BIKE RENTAL CUSTOM / PRIVATE NEWSLETTER TRIP ADVISOR INSTAGRAM

This bike tour is not a point to point, so you will stay in one Superior 3* seafront hotel with swimming pool. You won’t move from  hotel to hotel, so that you can relax and don’t pack your bags each day.

This bike tour is designed for those who have short time to dedicate to cycling holidays but still want to take advantage of the beauty of the island.

You will arrive with your flight in Cagliari and then move with an organized transfer (included in the price) to Calasetta village, on the minor island of Sant’Antioco. You can arrive on the weekend or any other day of the week and at any time, we will be at your disposal to organize this short escape in the best possible way.

In Calasetta you will be welcomed by a fantastic hotel located near the sea, in the countryside of the village; from here you will leave by bicycle to discover the wonders of the two smaller islands in the south west (Sant’Antioco and San Pietro).

Here you can discover the flavors of both Sardinian cuisine and the particular one of ancient Genoa, as the inhabitants of the island of San Pietro, the Carlofortini, are of recent Genoese origin and have maintained their ancient dialect and their centuries-old traditions.

At the end of the tour the return to Cagliari airport is guaranteed by a shuttle and is included in the price.

Meeting at Cagliari Airport and transfer included on the price to your first and unique hotel in Calasetta countryside. bike fitting and orientation. Depend on your arrival time you can ride along the west coast of the Sant’Antioco minor Island, where your hotel is settled ,for 38 km about and 540m. elevation gain.
Meals included: Dinner and welcome aperitif.

Cycling: loop bike trip from Calasetta to Sant’Antioco and Maladroxia beach. Pedaling towards north part of the little island, you will encounter terrific beaches and landscapes; the ride is very easy along the coast and soon you ll arrive at Sant’Antioco village full of roman ruins to visit. Then again along the east coast till reach Maladroxia famous for his beach . come back to Calasetta inland but towards Sant’Antioco.
Meals included: Breakfast, Dinner

Cycling: reach the harbor of Calasetta and take the ferry to Carloforte, the only one village on the Island of San Pietro. once arrived on the ground, you take the bike path skirting the coast towards La Caletta beach. then again to Capo Sperone and ready to enjoy a Spettacolare gelato in the centre of the town or a light lunch in one of the small and local restaurant of the village. ready again for the ridde of the aftern0on which will take you to Capo Sperone or at Tonnara at north cape of the Island. today you could enjoy the dinner in Carloforte and come back later with the ferry
Meals included: Breakfast.

Round trip cycling: bike ride from Calasetta to Tratalias via Sant’Antioco. Flat terrain pedaling near the seaside of north shore of the Island you reach Sant’Antioco and then the you’ll cross the short bridge which joint the Sardinia to the minor Island. soon after you will ride along the salt mine along the sea where beautiful pink flamingos will keep you company along the way. Then you’ll reach Tratalias an abandoned village. Here you are in the heart of the Sulcis area, renowned for the production of the Carignano red wine. Come back to Calasetta by the same way.
renowned
Meals included: Breakfast
transfer included at Cagliari airport 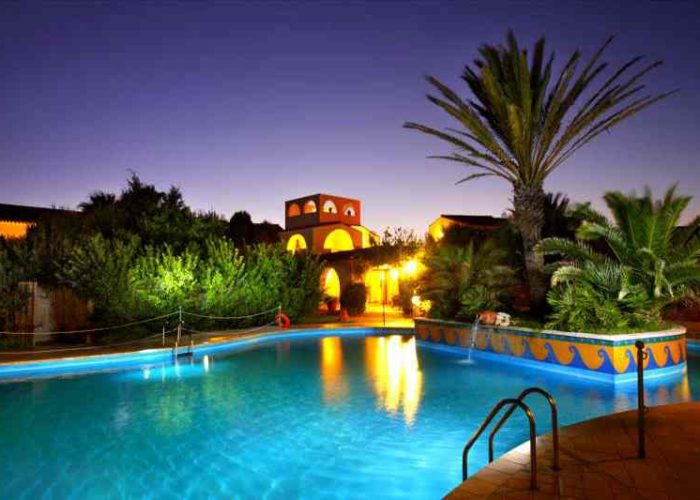 Located in front of San Pietro Island, the Luci del Faro hotel offers all the services and modern comforts, recently built with a 3 star. this hotel is very near to the fantastic beach of Calasetta and offers a shuttle service for those who want to enjoy in the center of Calasetta, only 3 km away.

I contacted Mauro to arrange a self guided bike trip. I had an excellent e-bike and my husband loved the road bike provided for us. The planning was made easy by BTS staff whom made excellent suggestions and answered all my questions by email efficiently and quickly. His hotel choice was good to exceptional – especially our first hotel – Villa Mosca – in Alghero! Each day our
luggage was transferred and in our room at our next destination before we were there!
I wouldn’t hesitate to recommend Mauro and Bike Tour Sardinia to anyone. We’ve done several other tours with other companies and this was definitely the best one yet! We would like to return to Sardinia one day! Stunningly beautiful island, wonderful friendly people, and excellent food and wine!

Beautiful landscape, unique boutique hotels, great food and wonderful biking, basically describes our experience with Bike Tour Sardinia. We went from Alghero to Oristano, exploring the medieval towns and coast. Mauro arranged a relatively seamless and fabulous self-guided adventure, being consistently available, helpful and responsive. We had both e-bikes and standard, but for me, the e-bike added ease and the ability for further exploration and smiles. I highly recommend Bike Tour Sardinia as a way to explore this beautiful island.